The defeats in the Carabao Cup final against Manchester City and away to Brighton in the Premier League forced Arsenal’s season to its knees with a knife to its back, and the Europa League as the club’s only saviour.

Although the recent results bring no pleasure, it brings clarity. Arsenal only have the Europa League to focus on for the remainder of the season, sitting comfortably in sixth with no feasible prospect of climbing up the table or falling down.

Both Arsenal and the Italian great have experienced peculiar seasons so far.

Arsenal are hobbling out of one of our worst forms in decades losing four consecutive matches in which we’ve only scored two goals and conceded 10, while experiencing our worst ever season under Arsène Wenger.

AC Milan had a promising start to the season after breaking their club transfer fees last summer. However, things turned sour in October and November, and then- manager Vincenzo Montella was fired. Gennaro Gattuso took charge and, although a shaky start to his tenure, has been riding a tsunami of success lately.

AC Milan haven’t lost in 13 matches, only conceding four goals (none in the last six fixtures).

Arsenal will be without our two strikers Lacazette and Aubameyang as well as Monreal, and Bellerin who’ll miss the match with a knee injury.

On the contrary, AC Milan enjoys no injuries to any important players.

(There are a couple of good videos on Gattuso’s Milan tactic on YouTube. If you want to educate yourself further before or after reading my brief analysis, check this one out).

Arsenal and Milan’s way of playing and mentality should produce an exciting match. And Arsenal do have a chance to win as long as we play the correct formation and don’t become too pedestrian in our passing play, which has been a problem lately.

Gattuso uses a 4-3-3 formation, however, it’s a flexible system that changes from defence to possession to attack.

While defending, AC Milan plays a 4-1-4-1 system where two players usually press rigorously together while the others keep the shape of the formation. 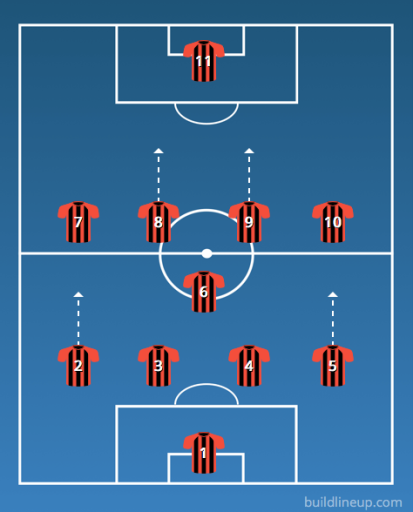 Their intense pressure and the risks their midfielders take with and without the ball leaves room between the lines that Arsenal should exploit.

Quick passes to Özil and Mhkitaryan behind the Milan midfield to create 2v1’s against their DM is the best option going forward. Welbeck needs to be sharper than in a long time as well, always making runs and keeping their back four back.

In possession, Milan are usually patient as they comfortably keep the ball and take a wide stance often switching the play from one side to the other when under pressure. Because of this, Arsenal should play with wide wing-backs (the three centre-back system) to counter their style and not exhaust themselves chasing the ball.

When attacking, Milan utilises their very offensive- minded full-backs through which many of their attacks are focused, resulting in many crosses. Again, Arsenal could remedy this with three centre-backs who mark players and clear crosses, and wing-backs who challenge their opponent full-backs before they become a threat.

Their offensive full-backs open the opportunity for counter- attacks for Arsenal and considering that this is the away fixture in a knock-out match, this should be our mentality from the start.

Recognising Arsenal’s injuries and Aubameyang being ineligible to play, and that I hope we’ll play three centre-backs, this is how I’d line up tonight: 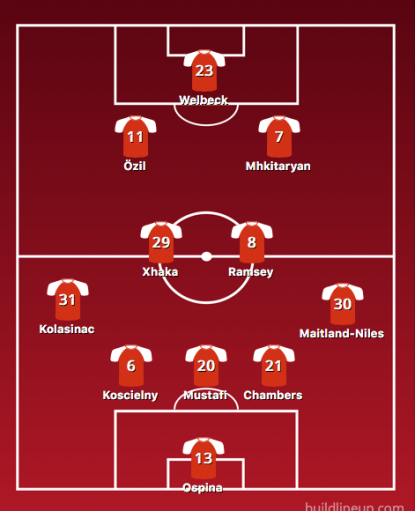 What the team has said

Welbeck reassured the Arsenal fans a fighting spirit against Milan.

“We’re professional footballers & we know what we’ve done to get to this stage. I think the minimum requirement is to stand & fight in every single area of the pitch, we know that our quality will shine through in the end.” – Welbeck

“For us, it will be important for us to stay focused. We know we have two games to qualify for the next round, so we need to be together and defend very well because they have a lot of quality up front.” – Wenger

“[We need] to fix reachable targets,” he said. “Be practical, pragmatic – focus on what you can do better and analyse well what you didn’t do well and not be scared too much about the consequences of a bad result.

Can Arsenal win the Europa League?

Unfortunately, of all the best teams that reached the knock-out stages of the Europa League, the only team which didn’t go through to the last 16 was Napoli.

More so, every top team other than Arsenal and AC Milan (Atletico, Dortmund and Lyon) drew weak teams.

Considering our recent form but also our sub-par performances throughout the season, and the teams to beat, Arsenal aren’t among the favourites to win anymore.

I think over two matches Atletico and Dortmund definitely beat us. And Lyon and RB Leipzig are difficult opponents we might beat.

However, with favourable draws in the quarter and semi-finals we could win the trophy if these results also came with fresh and needed momentum, especially if Lacazette returns unaffected by his troubling last couple of months (he should return for a potential quarter-final).

I don’t think recent form is as significant in this fixture as tactics, and honestly it never is.

But for Arsenal to get a positive result at San Siro we will have to adapt to Milan and not rely too much on our fundamentals.

The formation and some of the tactics we used in both matches against City are decent blue prints, but needs serious tweaking.

A good result for Arsenal is obviously a win. A more foreseeable result for is in the range of a draw or a one goal loss, 1-1 or 1-2.

Arsenal scoring an away goal is crucial though, as Milan is likely to score and we haven’t been nearly good enough lately to believe we can win by two or more goals, even at home.

Much is stacked up against Arsenal. Hopefully the players can appreciate the occation of the match and the predicament the club is in, and improve their recent form dramatically. If not, we’re out.

For Norwegian translation see “Norsk” at the top menus